Ministry - Twitch + The Land Of Rape And Honey

Al was offered the rock'n'roll suitcase full of cash by Sire Records to sign on the dotted line in 1985. His bad experience with Arista meant Al was wary and this time around could get a better deal for Ministry and himself, allowing him to also invest in Wax Trax! The first album for Sire was Twitch, which was recorded under the influence of the drug "Whizz" (as it is known in the UK) - ultimately helping to name the album!

The drug fuelled recording sessions were in Southern Studios, London with Adrian Sherwood, who helped Al hone the harder, industrial sound with distorted vocals (although the latter would not appear until the next album). Though the haze, Al learnt a lot from Adrian Sherwood including recording , production and mixing techniques. While in London they shot the video for the Over The Shoulder single hiring Storm Thorgerson (he of Pink Floyd, Led Zeppelin, Peter Gabriel and Genesis cover artwork fame). You can officially buy the Over The Shoulder video on iTunes.

Al left London and went to Belgium becoming a Revolting Cock for a while, popped over to Berlin to finish up Twitch, then back to Chicago for more work, recording and remixes. Money was steadily coming in and by 1988 Al was addicted to multiple drugs including heroin, coke and psychedelics! Recording the next album, The Land Of Rape And Honey, was Al's dream come true though - everything previous had worked up to this point in time. They (Al, Paul Barker and Bill Rieflin) recorded stuff (at that point it couldn't really be called songs) in huge, long sessions to tape, Al would then go home and edit, edit, edit. This, of course, for the time, was all done manually on reel-to-reel tapes using razor blades. The concoction of spliced tape, drugs, coffee, dirt and perspiration over a six month period resulted in an incredible album of crazy synths, drum (machines), guitars, bass, loops, reverse loops, more loops, some distorted vocals plus movie samples.

The Land Of Rape And Honey and its single Stigmata are celebrating their 30th anniversaries this year in 2018 - the album's is coming up on the 11th October. "Stigmata" became a huge track for Ministry but in fact it was put together last minute, it's basically sampled, there are no real guitars, it's simplistic and Al hates it! A bit like The Human League's Don't You Want Me track which was stuck on the end of the album, the band didn't care for it, but it ultimately became a massive hit and fan favourite. The Human League still play their track live to this day though…

There's a video for Stigmata and you can officially buy it on iTunes.

The Stigmata track was also used very effectively in the cult 1990 sci-fi film Hardware directed by Richard Stanley (throughout the film there are cameos by various famous musicians including Iggy Pop (voice on the radio) + Carl McCoy of Fields Of The Nephilim (scavenger at the beginning) + Lemmy of Motörhead (the boat taxi driver)! Products For "Ministry - Over The Shoulder"

Products For "Ministry - The Land Of Rape And Honey"

Uncle Al released one of the greatest synth-pop albums, With Sympathy aka "Work For Love", 35 years ago and that special anniversary just passed on the 10th of May this year (2018). However, unfortunately, it's not exactly what Al wanted to do and he hates the album and hated the experience of making it too - he now famously wears a T-Shirt saying "Will sign With Sympathy for $1000 $ $ $ $ $ $ $" (apparently someone did turn up one day offering $1000 - Al did the deed and donated the money to charity).

So how did this (in)famous album come about? Well, the Arista record label offered to make Ministry the next Joy Division, which was fine with Al so he signed the contract, but actually all the label wanted was a "gay, teeny-bopper pop band". Al had already put some demos together of harder-edged, dark electronic stuff (which ultimately ended up on Twitch and The Land Of Rape And Honey) but of course Arista went "Er… no way!" - they brought in their own producers, engineer and backing singers and shaped everything that Al tried to create. They flew him to England at one point to record a music video for Revenge and even do a small promotional tour (all of which most likely only happened because they waved contract paperwork in Al's face). Al did do an interview with Richard Skinner (a famous British broadcaster) and this ended up on a cassette tape that was released as a bonus freebie stuck to the front of the UK limited edition 7" single of I Wanted To Tell Her. 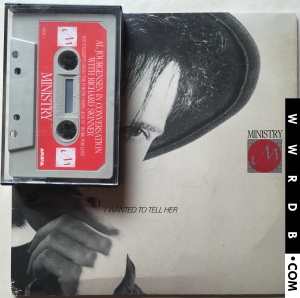 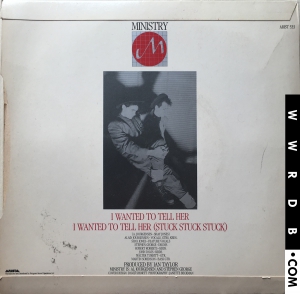 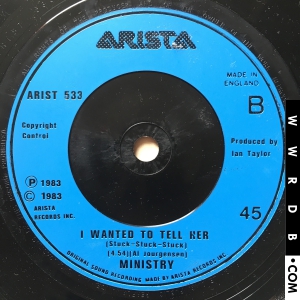 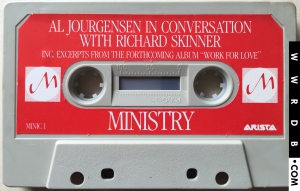 The track "Same Old Madness" was touted as being the first single (and video) in mid-1982 but that changed and Work For Love was released instead, initially in 1982 with different track titles/mix names, which didn't sell well. So although I Wanted To Tell Her was planned as the next single Revenge (You Did It Again) was moved up and released instead, late in 1982, along with a newly edited video. This single sold much better so Work For Love was released again, also selling well this time especially in Europe. And so "Work For Love" became the title of the album in Europe. Finally, I Wanted To Tell Her was released. The "Same Old Madness" era music and video did not officially appear until 2014 when those early tracks were released as part of the Trax! Box - see last week's WaxTraxFriday article.

Ministry did about thirty live shows promoting the album (supporting various acts including Depeche Mode). But Al hated the music, the direction, the corporate bullshit. So Al sued Arista, the whole thing came crashing down, he didn't make much money from the venture and he moved back to Chicago hooking back up with Wax Trax! Meanwhile, Arista had released the album all over the world selling lots of copies and probably still do to this day… 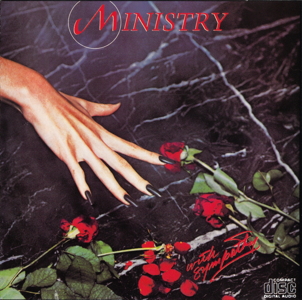 • With Sympathy / Work For Love

Link to this article = https://www.cybernoise.com/article/cn/wtf/waxtraxfriday_20180914.php (how to link to this web site - details)
Article number = 73